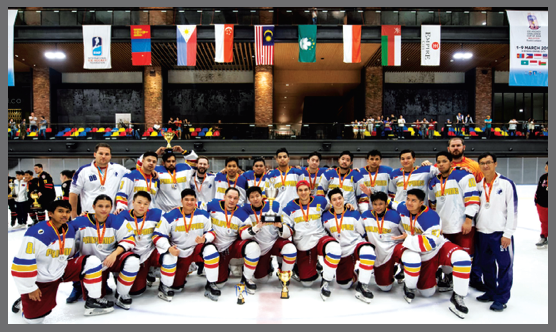 Considering the Philippines is a tropical country, ice hockey is perhaps the last thing that would come to mind. Of course, there are exceptions
such as athletes who have grown fascinated to the sport for one
reason or another.

If one looks at the list of popular sports, ice hockey would probably be way down the bottom. This means that Philippine ice hockey teams have to work their way to the top. How? By showing the world that Filipinos can rule on ice and produce good hockey players despite the obvious variation in temperature.

The past months have seen ice hockey make headlines. First was the conquest of the PH Men’s ice hockey team which bagged the silver medal at the 2019 International Ice Hockey Federation Challenge Cup of Asia. The
tournament was held from March 1 to 9 in Kuala Lumpur, Malaysia where Mongolia took the gold medal.

Adjudged Most Valuable Player of the tournament was Steven Fuglister, who revealed that they had a good game plan in place against Mongolia. The only problem is that the Mongolians had other things in mind and ended up spoiling the party for the Filipino contingent.

“Some individual mistakes happened and the experienced players from Mongolia took advantage of that. After the game, everyone was devastated. We certainly aspired for more but I told the team that we should write this off as a learning experience – especially since we brought in a lot of players for the first time,” said Fuglister.

Aside from Fuglister, there were two other Filipino ice hockey players who got special awards. It does speak well on how someone from a tropical country can thrive on ice but the 32-year-old team captain believes that more can be produced using the correct process.

“It starts with accessibility at the grassroots level and that’s where our Federation has taken big steps in the last year – holding learn to play classes every Saturday for people of all ages to try out the sport for a minimal fee. We have to recruit in schools and get kids from an early age interested in the game to create a bigger base and more competition for players locally,” he explained.

And like any other sport, there are certain fitness requirements needed to thrive on ice. Fuglister gets into detail to explain.“Hockey is a fast-paced stop and go kind of sport so you need to be in good physical shape. Otherwise, it will be hard to keep up,” said Fuglister.

“A good base cardio, lifting weights, plyometrics with focus on leg and core strength is what benefits hockey the most. While the physical part of the game, body checks, etc, will always be a part of the game it has evolved where there is more focus on speed and skills. You don’t necessarily have to be 6-foot-3 and/ or 230 pounds anymore to be a successful hockey player in today’s era,” he added.

Other than the mentioned fitness practices, Fuglister sees basketball and soccer as two other sports that can help in keeping a hockey player in shape.“I would say Basketball and Soccer would rank pretty high in terms of stop and go and the endurance involved as well,” he replied.

The PH Women’s Ice Hockey Team also had their share of glory when they bagged the gold medal at the 2019 IIHF Women’s Hockey Challenge Cup Division 1 held at the Zayed Sports City Ice Rink in Abu Dhabi.

It was a dream come true for Bianca Cuevas, the top gunner of the tournament.“For that dream to finally be a reality after all these years, it’s surreal. To be a part of this historic event is a true honor and a great privilege. I’m beyond grateful for my teammates who I am proud to call my sisters and for our amazing, dedicated coaches. This wouldn’t be possible without them,” said Cuevas.

The 20-year-old Cuevas was raised in Manila but studies and plays hockey in Canada since September 2016. Bianca actually started out as a figure skater before shifting to ice hockey. “I’ve been playing since I was 9. I started skating when I was 4. I started as a figure skater then got interested in hockey because of my older brother,” relayed Cuevas.

Fuglister and Cuevas are key reasons why ice hockey has gotten its share of attention in the local setting. Their recent achievements are something to marvel although both admit that they still have plenty more to show on ice with various tournaments lined up moving forward.