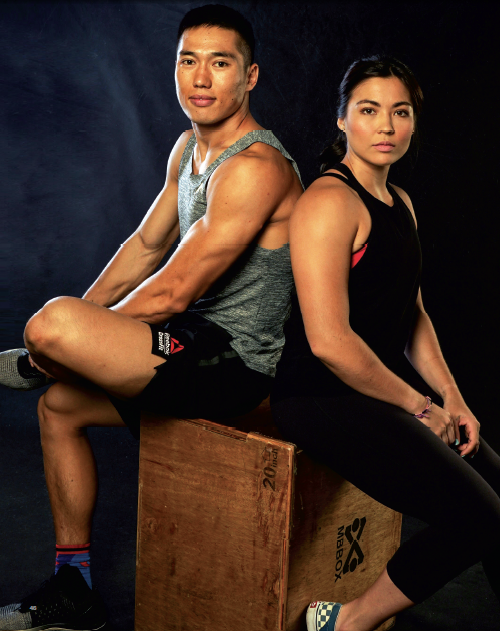 Wolfe, 24, was born in Taiwan but ended up growing up in Subic. She currently works as an indoor cycling instructor and has been into Crossfit for the past two years. Dorjsembe, on the other hand, is 25 years old and hails from Mongolia. Rocky has been residing in Cebu for the last five years and is currently a Crossfit coach and athlete.

From hindsight, the immediate change that Crossfit brought to Isabelle’s life is the physical aspect. However, she adds that doing it has done more than that – changing her life as a total person.“I’m obviously the strongest person I’ve ever been. I’m more skilled than I’ve ever thought that I could possibly be,” said Wolfe.

“But it also changed me emotionally. I’m a lot more confident in myself. I’m proud of who I am whereas before I was very shy-natured, very insecure and cautious about what people are saying about me and who I was. It’s also changed me mentally,” she added.

Isabelle says that prior to taking up Crossfit, she was the shy-kind of a person or an introvert. She prefers doing things on her own and is not usually the type who would stop and greet anyone she comes across.

“In a way that changed in Crossfit because of the community. Like now, if I see someone who’s shy, I will approach them because I know how they feel and I want to include them in this community of Crossfit. The confidence doesn’t come from me being able to stick my head up or stick my nose up in the air and think that I’m the best. The confidence is more internal, in the fact that I can accomplish anything that I put my mind to,” explained Wolfe.

So far, Wolfe has participated in about 20 competitions in the last two years and from the looks of it, there is more to come for the Fil-Taiwanese.

“ I did the fittest individuals, Manila Throwdown Individuals, Scaled, Battle of the Strongest, and I went to Kota Kinabalu. Then I did two Team Throwdowns. So that’s already six last year,” she said.“And just this year, I competed in the Kalis games. The RX Battle of Strongest, RX Fittest, RX Manila Throwdown, Cattles games and doing three more,” Wolfe adds.

With a hectic schedule, Wolfe said that that being single hardly bothers her.“I am single but it’s fine. I love it, like I said I’m independent, I love being with myself and I’m surrounded by so many incredible people, so many incredible Crossfitters,” she said.

HEALTH AND WELLNESS IS KEY FOR ROCKY

For Rocky Dorjsembe, Crossfit is something tailored for people who love to live a good and healthy life. He singles out the functional movements account for one to become well-rounded individuals.

“Components to be physically fit like cardio-vascular endurance, muscular endurance, strength, flexibility, agility, and coordination – if you don’t have all of them, then you should start doing Crossfit,” said Dorjsembe.Executing functional movements and the results therein will depend on the intensity that a Crossfit athlete sets. However, the proper gauge depends on a person’s physical and psychological endurance.

“Intensity shouldn’t be high when you’re starting. Intensity is low so your muscles adapt to movements first. After practicing forms and good techniques, increasing the weight and intensities would follow,” he explained.

Similar to Wolfe, Crossfit changed Dorjsembe’s lifestyle as well.“The one thing I love about Crossfit is the community. So I take Crossfit to express my spirit. The community is an amazing thing. At first, I was a silent guy. When I started Crossfit I was quite shocked at how everyone was encouraging and supporting me. No matter what your age is – whether you are young or old, male or female– we all do the same programming at the same time,” he said.Dorjsembe has participated in nine events in 2017 and seven in 2018. Of those events, it was the Asian Championship that is most memorable to him.“In 2017, the biggest event I’ve been to was the Asian Championship. I was blessed enough to represent the Philippines. It was a three-day event. I have seen lots of actors from all over Asia, all testing their fitness in the same place,” Dorjsembe shared.

FROM STRONG TO STRONGER

At first glance, there is no denying that Rocky looks physically fit with his well-chiseled physique. But according to the 25-year-old, Crossfit made him realize that being strong is not enough.

“I thought I was physically fit but when I tried Crossfit I just realized being strong is not enough. So to be physically fit, you need to acquire more components. So the biggest thing that I really appreciate from Crossfit is discipline. I take Crossfit as a lifestyle – it’s a way to eat, way to train, and also a way to behave. So that’s what I like. So if you wanna maximize your performance, you focus on the rest and focus on your nutrition at the same time. You’ll become a better person and a healthier person,” said Dorsembe.

Similar to what Wolfe said, there is the humbling mental aspect that Crossfit preaches to athletes.“Crossfit taught me how to be humble. In competition and also in training you can win or lose. It’s all about accepting the circumstances, knowing that you’re giving your best without regrets. That’s the best. That’s what Crossfit taught me the last three years,” he ended.