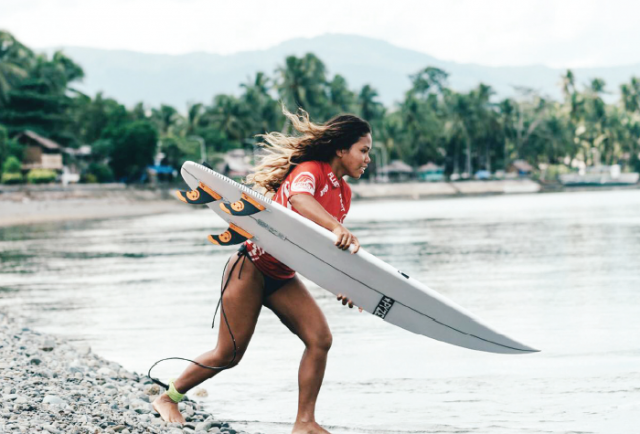 She is only 21 years old but Pinay elite surfer Ana Mae Alipayo is already exhibiting characteristics of becoming an effective leader.

Alipayo, one of the country’s bets in the sport of surfing which will make its debut in the upcoming Southeast Asian Games, recently went to South Africa for a surfing event.

Born in Catangan, Siargao, Alipayo tried the famous Jeffreys Bay located in the Eastern Cape province where most of the best surfers in the world regularly strut their wares either during competition or simply to hone their skills there.

“I wanted to surf there, know what’s happening there and see the best pro surfers, get to see what they’re doing, their tactics so that I can use them and see what the other teams are doing,” said Alipayo. “I joined a fun competition and saw a lot of good talent, I got to see my strengths and weaknesses and know what do I need to SOULShe is only 21 years old but Pinay elite surfer Ana Mae Alipayo is already exhibiting characteristics of becoming an effective leader.improve more and get better.”

Weeks after her South African gig, Alipayo felt the need to immediately share whatever knowledge she gained in Soutf Africa to as many Filipino surfers as possible.

“I can’t wait to meet our fellow surfers and get to share what I’ve learned from the physiology and anatomy of the optimum fitness so that we could actually bring this country and showcase to the world what we got,” said Alipayo.

Alipayo and the rest of their community hopes to instill among Filipinos that surfing is a legitimate sport and is not simply a recreational thing which has been its image for the longest time.

While the Department of Tourism was able to create huge awareness about quality surfing in the Philippines, the way it was marketed though turned out to be a drawback as it was, for the most part, was seen more as simply part of the country’s tourism attractions.

It helped Filipino surfers a lot that surfing has been included as a regular Olympic sport for the first time in the upcoming quadrennial games in Tokyo, Japan in 2020, something which made it easier for the United Philippines Surfing Association (UPSA) to gain the needed accreditation from the Philippine Olympic Committee (POC).

While in South Africa, Alipayo was teeming with excitement not only for herself but for the fact that she would be able to share legit tips on how to improve one’s surfing abilities.

“It was my first time and it was a dream for me to surf in that area. That is part of the championship tour in the world surfing league,” said Alipayo “I joined a fun competition and saw a lot of good talent, I got to see my strength and weaknesses and know what do I need to improve more and get better.”

It also dawned upon Alipayo that, after witnessing world class talent at Jeffreys Bay, hard work is needed when it comes to uplifting the quality of surfing in the country.

“I got to observe what’s happening there and see the best pro surfers, get to see what they’re doing, their tactics so that I can use them and see what the other teams are doing,” said Alipayo.

It seems illogical though that Alipayo would make the freezing waters of Jeffreys Bay part of her SEA Games buildup, noting that the biennial meet’s set up is tropical.

“As a surfer, I’ll just take it. I’ve been stuck in the Philippines for many many years. I plan to go beyond the SEA Games and it was an opportunity so I grabbed it,” disclosed Alipayo.

Still, Alipayo felt she gained a lot in her South African experience, specifically in her objective of knowing how far she has come.

“The water is really cold and almost freezing. It was super hard to stand up. You thought you were the best but when you get to the cold water and different types of wave, its an eye opener for me,” said Alipayo.